Henry Weinhard’s was recently recommended by a fan of the blog. I’m pretty excited when someone else recommends me a root beer, especially if they’re a fan of my work. If I can get my hands on it, especially during this pandemic, I’ll try and review it.

Honestly I’ve seen Henry Weinhard’s around for years, but because they only come in a six pack, and since no one has ever mentioned it to me before, I’ve been apprehensive to give it a try. Since it’s hard to find really good root beer in my experience, I am more prone to one-offs than packs. That way I don’t waste a bunch when I find another thing I dislike. What does one usually do with three-to-five brews they don’t care for? There’s only so much you can give away before people run for the hills!

Henry Weinhard’s looks like your standard traditional root beer. Brown label, orange accents, old-timey pictures of barrels, and a portrait of a man I suspect is the myth, the legend, Henry Weinhard himself. The lid is a little provocative, with the supposed Mr. Weinhard asking you directly to “flip my lid.” Okay Henry, I’m game.

The Henry Weinhard and Blitz-Weinhard site is packed full of trivia about Henry, and his story. Weinhard came from Germany to make alcoholic beer, but after his death and during prohibition, the brewery began producing pop, syrup, and non-alcoholic beer. It appears the business is focused on traditional alcoholic-based drinks, so I’m apprehensive to assume that Weinhard’s is going to be putting all of their effort into their root beer. That being said, if they’re using the same recipe handed down through the ages, maybe it will be a glimpse into their true glory days. We’ll find out shortly.

A gourmet soda, hand-crafted with natural and artificial flavors including sassafras, vanilla and honey.

I’m going to go out on a limb here and make the pre-tasting assumption that Henry Weinhard’s isn’t using a century-old recipe. I appreciate that on their label they mention that sassafras, vanilla, and honey are used, but we all know natural and artificial flavors is a cop-out and I’m not into that. Nevertheless, this is better than most other root beers I’ve reviewed. I’m not going into this disappointed, yet. 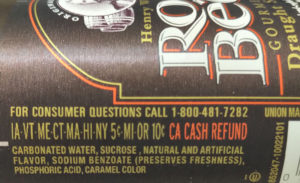 Sucrose is the scientific name for table sugar, and it appears recently Henry Weinhard’s may have changed their ingredient list to identify it as cane sugar. I’ve included an image of my ingredient list in the interest of transparency and full disclosure.

The initial smell after flipping Henry Weinhard’s lid is definitively traditional, but somewhat weak. The taste matches that, which isn’t terribly impressive. There’s definitely that traditional bitterness behind the initial sweetness, but there’s also a strange flavor that I’ve only previously identified with sugar alternatives. I believe I can make out the vanilla and honey, but despite having so much sugar in it, it’s not a particularly sweet brew.

The carbonation, like the flavor and smell, is also weak—which I usually appreciate. In this case, it feels like I’m drinking thin root beer syrup. That’s not the most appetizing statement. Speaking of, Henry Weinhard’s really coats the mouth, but a swish of water quickly solves that problem.

Over time, the bitterness becomes very apparent, while the carbonation dissipates further. There’s very little after taste, but it has staying power due to the stickiness of the root beer. Since I don’t particularly enjoy bitter root beers, it’s probably harder for me to detect the sweetness through the bitterness. It’s still there, but it’s very subtle.

I think this brew would benefit from an open glass and ice cubes, because while it is much better cold than it is after it has time to warm up, I have a feeling it would be better permanently ice cold and the water dilution might help with the stickiness.

Henry Weinhard’s is a run-of-the-mill traditional root beer without any particularly exciting qualities, but it’s not really disappointing. I wouldn’t consider it a major step-up from traditional mass-produced canned root beers. It’s definitely around the same level, but just getting out of that tier. The bitterness is intense, and I think if you like bitter root beers with some sweetness behind that taste, then Henry Weinhard’s is worth a try. Without the sweetness though, it would be disastrous.