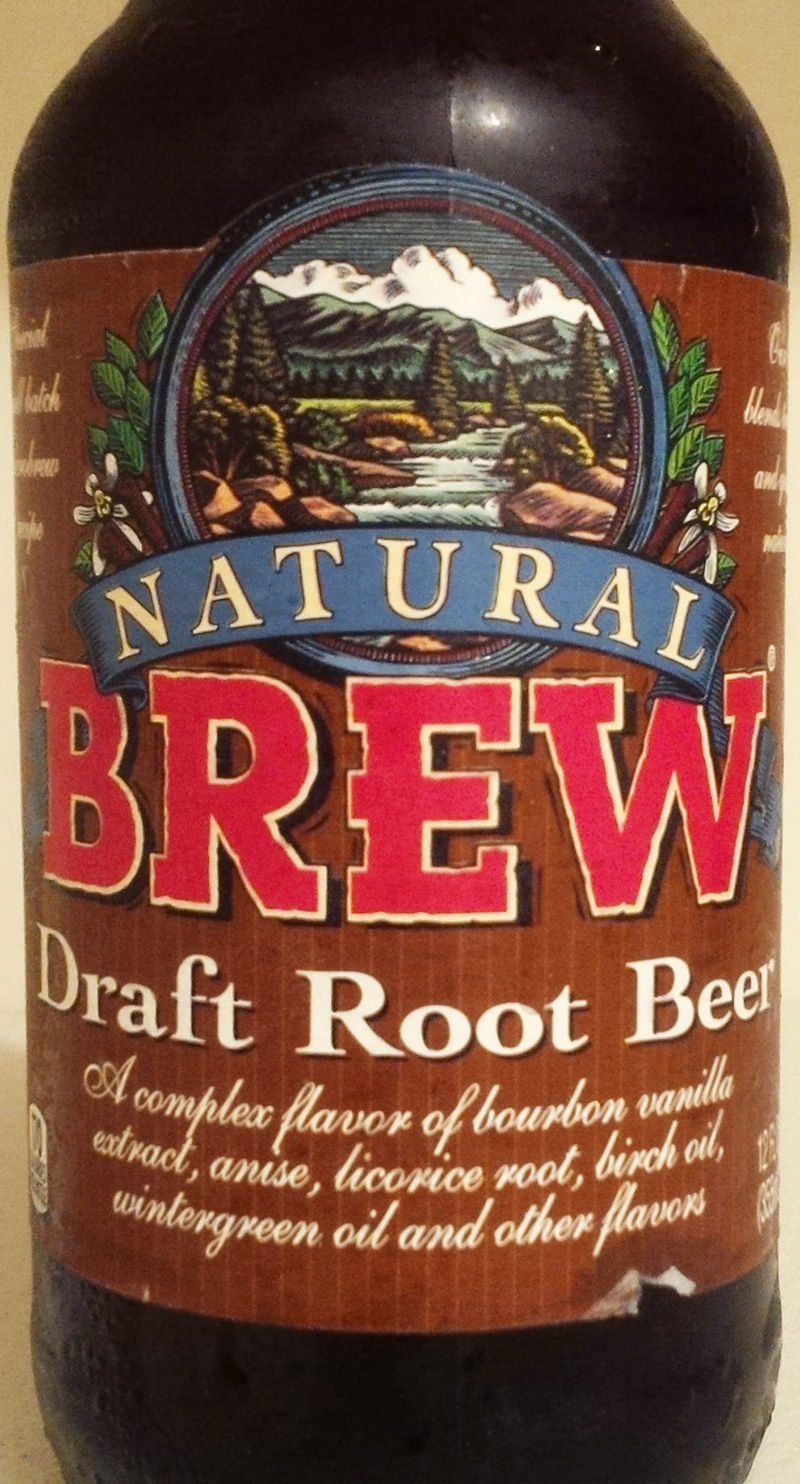 I have this strange feeling that Natural Brew is going to remind me of Virgil’s, especially after reading the small bit of text above that’s associated with the label. Although… I’m sure longtime readers see a stunning problem for me with what they’ve included. I’ve seen Natural Brew around a bit, and it’s often on sale, but I haven’t given it a try until now. Truth be told, pretty much anything is better than my last endeavor, IBC. Nevertheless, I’m excited to try something that brands itself as natural. Let’s get started!

Unlike other bottles, Natural Brew is very stout. I suppose that goes with the whole “Draft Brew” marketing gimmick they’re going for. To that, the label and the bottle both featuring dark and earthy colors conveys a sense of nature. That’s definitely what they’re going for, and it’s working. Although I was initially put off by the loud and complicated design, I think this really works for them, and I’m hoping that the root beer flavor is also just as loud.

Natural Brew is a relatively new brand by the Smucker Natural Foods, Inc., also known as the J.M. Smucker Company. Yep, the same people who make all those preserves. This particular brew was created in 1994, and among its brand include ginger beers, “creme” soda, and chai cola. Smucker’s is a huge brand, so if they decided to put a lot of effort into a brand new root beer and they’re still marketing it, it must be a decent seller on some level.

Everyone knows how I feel about cryptic natural flavors, although that’s presumably better than artificial. One thing I see here, in contrast with other brews, is the similarities between this brew and Virgil’s, which may indicate that has some semblance of similar quality. Licorice and wintergreen are strong flavors, and they can definitely be overpowering. At the same time, they usually define really good root beer flavors.

First impressions aren’t all that good, unfortunately. Although the carbonation is perfectly right for my particular palate, that is to say, it’s not overly carbonated and very smooth, the flavor isn’t. Natural Brew is refreshing, however, the root beer essence I expected was weak.

Actually, on second thought, it’s not necessarily weak, but it’s definitely different. This brew is actually completely different to any other root beer that I’ve tried. There’s a noticeable and significant association to mint, and as a result, Natural Brew is cooling (especially on a hot day, like today.) Furthermore, there’s also a strong airiness to it, which is quite pleasant and contributes greatly to its refreshing taste. For those wondering, it’s not sickly sweet, and it isn’t overly bitter. It’s right down the road.

This is, so far, a very surprisingly and puzzling drink.

Over about forty minutes, despite the seemingly lack of carbonation, Natural Brew was capable of maintaining its carbonation at a satisfactory level. That being said, the flavor is definitely growing on me. At one point, I thought that maybe this was a bit more like a birch beer than a root beer, but I’d say that’s not necessarily correct. It’s just different, which isn’t to say that it’s bad. On the contrary, it’s pleasant. Not nearly as powerful as something like Virgil’s or Polar, but it has its own unique flavor. It may just be me, but I feel like it has a somewhat mild syrupy texture to it, but a swish of water does wonders to combat that. There is very little after taste, and what after taste there is, is more mint-like than bitter or sweet.

Natural Brew is unique, and really knocked me off kilter. When I first started diving into this brew, I was immediately disappointed. The flavor, however, grew on me, and my initial expectations for a traditional brew went right out the window. I could actually see myself enjoying this one again, but I’m not entirely sure I would call it the root beer I’m looking for. Nevertheless, I recommend it to those looking for something new.